China has the third largest nuclear power fleet in the world, behind only the United States and France. As of September 2022, China’s 54 operating nuclear power units had roughly 52 GW of capacity. 1

Much of the growth of the global nuclear power industry is in China.

In 2021, nuclear power provided roughly 4.8% of China’s electricity. Two commercial reactors and one demonstration reactor were connected to the grid. In October 2021, the State Council reiterated that nuclear power will play an important role in peaking carbon emissions before 2030. 3

Construction on the first civilian nuclear reactor in China began in 1985. The program grew slowly with three reactors in operation by 1994. During the 10th Five-Year Plan (2001–2005), the Chinese government launched an ambitious expansion of its nuclear power program, calling for the construction of eight more nuclear plants. That trend continued in the 11th Five-Year Plan (2006–2010), which called for further expansion of the nuclear power program and a focus on Generation III technologies. 4

The Fukushima accident on March 11, 2011, brought the rapid expansion of China’s nuclear program to a halt. China’s State Council ordered an immediate safety review at plants under construction and suspended approvals for new plants, pending a major safety review. In October 2012, a new safety plan was approved and approvals resumed. 5

In the past decade, at least two nuclear projects in China have been canceled due to strong public opposition. These include a proposed uranium processing plant in Guangdong (canceled in 2013) and proposed nuclear fuel reprocessing facility in Jiangsu (canceled in 2016). 8

The Chinese government supports the development of nuclear power with a number of policy tools:

In building its nuclear power fleet, China has imported technology from the United States (AP1000), Canada (CANDU), Russia (VVER) and France (M310 and EPR). The Chinese government aims to localize these technologies and become self-sufficient in reactor design and construction.

Nuclear waste in China is stored on-site at nuclear power plants and in temporary storage facilities. In part due to the country’s dependence on imported uranium, the government is planning a closed fuel cycle. Testing started at a pilot reprocessing plant in Gansu Province in 2010. A larger demonstration project is under construction at the same site and projected to begin operating by 2025. The possibility of developing a coastal site is also being assessed. 17

China has no law on nuclear liability. Two “Replies” from the State Council, in 1986 and 2007, provide guidance on this topic. 21 A draft Atomic Energy Law was first proposed in 1984 but never enacted. It was circulated for consultation in 2018 and is tentatively scheduled for deliberation by the Standing Committee of the National People’s Congress in 2022. 22

Regulations directed explicitly at the nuclear industry include:

One key question with respect to the future of nuclear power in China is the siting of nuclear power plants in inland provinces. Safety concerns and public opposition have stalled approvals at inland reactor sites ever since the Fukushima nuclear accident in 2011. Due to land constraints in coastal regions, expansion into inland provinces will be needed for significant growth in the Chinese nuclear power sector.

The Chinese government identifies its nuclear power policies as part of its strategy to fight climate change. 23 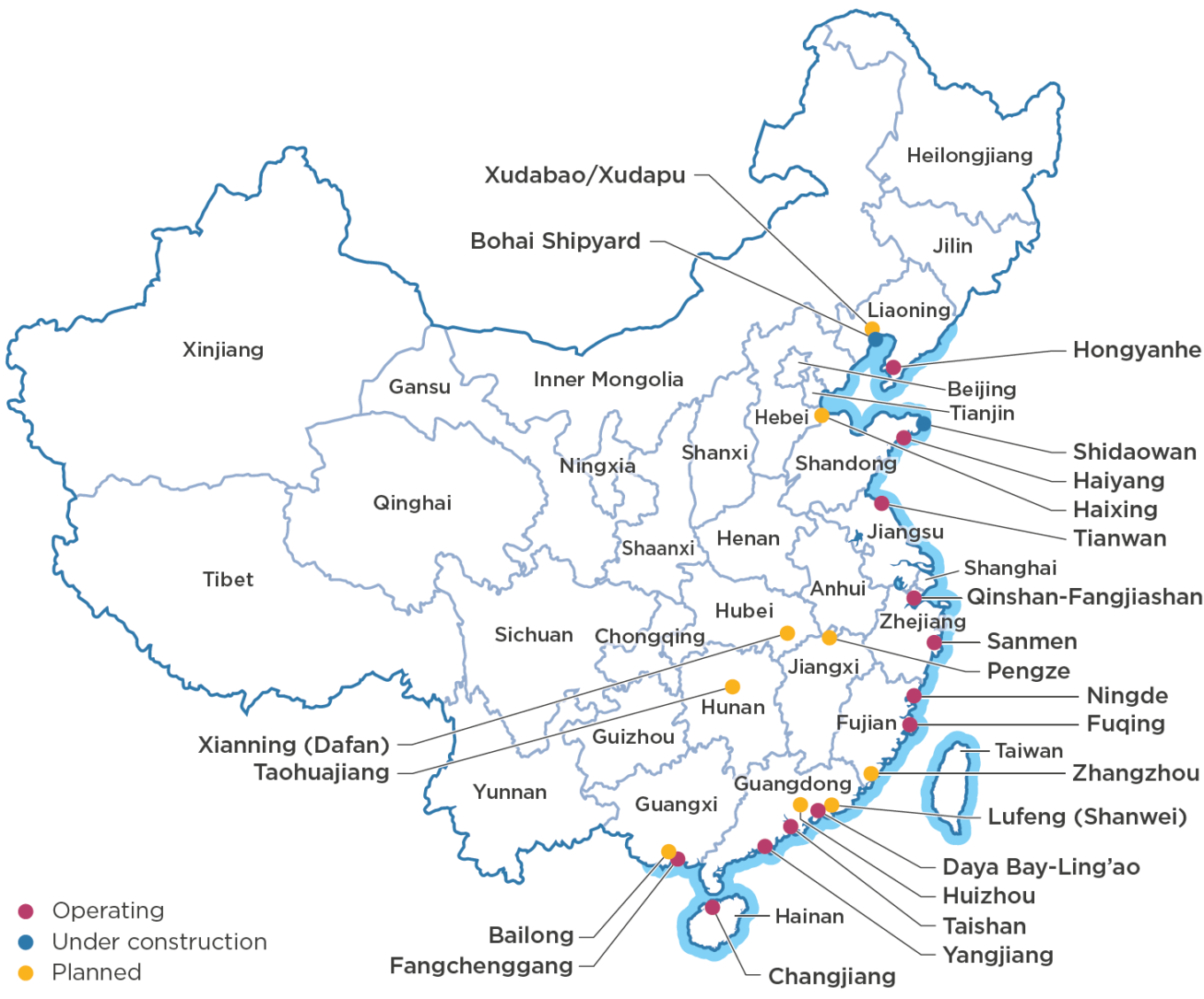