Carbon capture, utilization and storage (CCUS) starts with the capture of carbon dioxide (CO2) emitted from power plants, factories or other industrial facilities. Once captured, the CO2 is either (i) used in products, or (ii) pumped underground for long-term storage.1

Deployment of CCUS technology in China has been modest to date, but is growing. In April 2022, a report commissioned by China’s Ministry of Science and Technology (MOST), the Chinese Academy of Sciences and others found that CCUS can “promote China’s smooth transition from a fossil energy-based energy structure to a low-carbon multi-energy supply system and ensure China’s energy security while reducing emissions.”2

China’s CCUS projects are spread across much of the country, with most in northern or eastern provinces. (See Figure 15-1.) 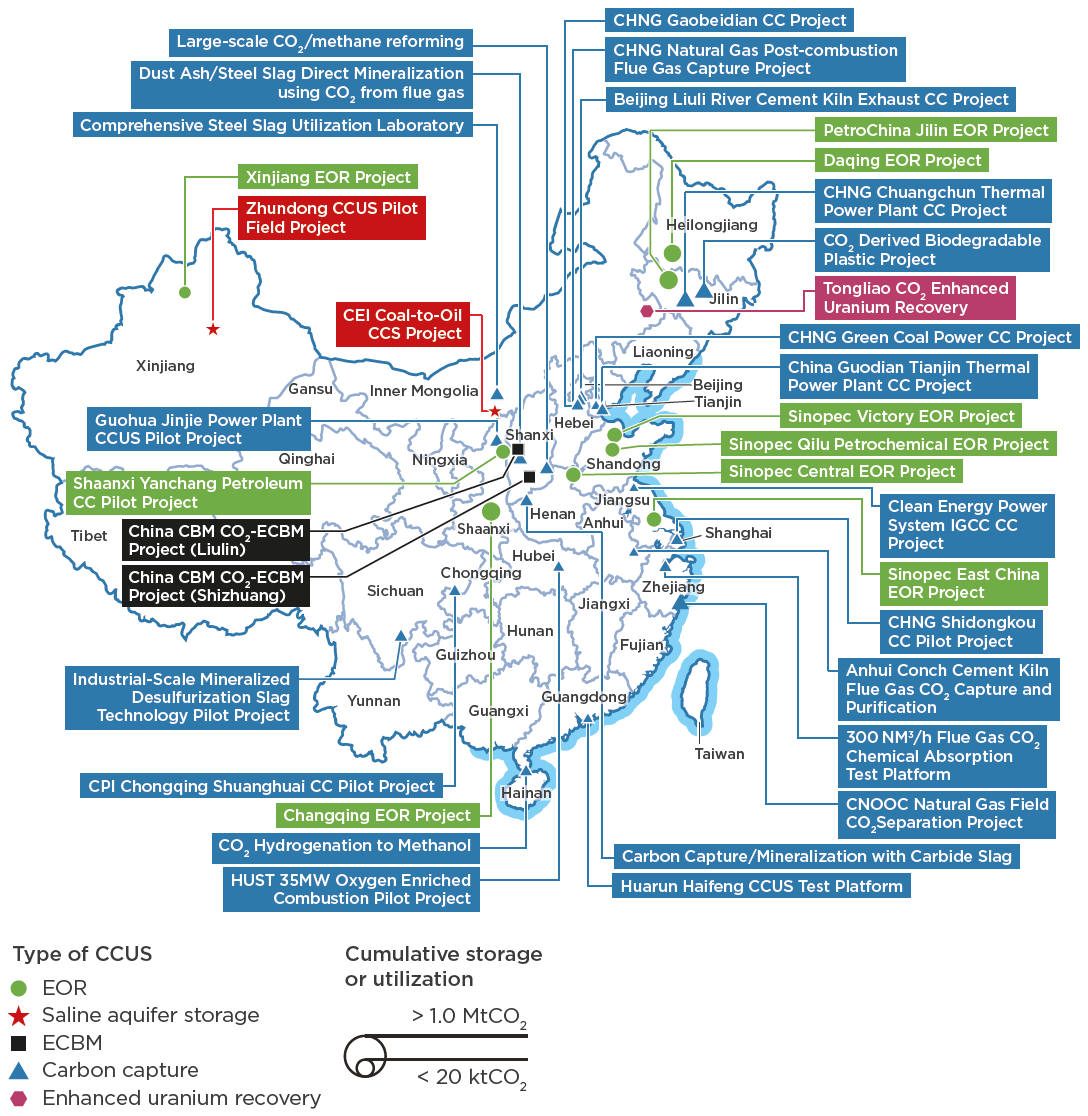 The principal technologies for capturing CO2 are post-combustion chemical absorption and physical separation. Pre-combustion technologies, including integrated gasification combined cycle and industrial separation, are also used. Other technologies such as oxyfuel combustion, membrane separation and chemical looping are at early stages of development.5

Carbon capture has been used in a variety of industrial processes in China including power generation, natural gas processing, cement and chemical production, and coal liquefaction (Figure 15-1). Notable CCUS projects under development include coal liquefaction plants in Ningxia Province and integrated gasification combined cycle power plant in Tianjin. One project is linked to a steel plant with an annual capacity of 90,000 tonnes (Figure 15-2).

China’s largest CCUS project entered into operation on August 29, 2022. The Sinopec Qilu Petrochemical Company will capture the CO2 and transport it to Sinopec Shengli Oilfield for enhanced oil recovery (EOR). Sinopec estimates that the project can cut CO2 emissions by 1 million tonnes per year.6

The principal use of captured carbon dioxide in China is for EOR, although a few projects are operating which use the carbon dioxide for other purposes, such as the production of chemicals or cement or in the food and beverage industry. The China National Petroleum Corporation (CNPC) applied EOR successfully to the Daqing oilfield in the 1960s. From the 1990s onwards, a growing number of other oilfields followed suit as well productivity started to decline. The effectiveness of many of these projects was limited by the low reservoir permeability and the practice of using carbon dioxide in a gaseous or liquid phase rather than in a supercritical form.7

Projects to demonstrate the application of EOR to CCUS came onstream in different oilfields between 2006 and 2008.8 There are now at least nine such projects, of which three are in commercial operation (Figure 15-1). At least four additional projects with a total annual capacity of 2.3 million tonnes per year are under development and due to be commissioned during the 2020s (Figure 15-2).

China possesses large sedimentary basins with saline aquifers that can be used for the storage of CO2 both onshore and offshore. The CO2 storage potential of these basins is enormous. One study found that China has more than 2300 Gt of deep geologic storage capacity dispersed throughout the country in onshore basins. (This is roughly 230 years of current CO2 emissions in China.)9

As of late 2021, two carbon capture projects in China are dedicated purely to the long-term storage of CO2. Both are small in scale (Figure 15-1). However, three large-scale projects are due to be commissioned during the 2020s with a planned aggregate annual capacity of 5.0 million tonnes (Figure 15-2).

Discussion of CCUS in Chinese policymaking dates to at least the 11th Five-Year Plan (2006–2010), which mentioned the need to develop CCUS technologies but provided no details. In the 12th Five-Year Plan (2011–2015), CCUS was identified as a critical technology in various plans, including those for scientific research and development. During this period, the amount of scientific research into CCUS increased markedly, as shown by a dramatic increase in the number of scientific publications on the topic from Chinese institutions. The number of international collaborations in this field also rose. At the same time, banking institutions began to recognize CCUS as being qualified for green credits and green bonds.11

In 2011, the MOST issued a technology roadmap for CCUS spanning the period 2011–2030. This covered technologies for capture, storage and use, as well as the need to develop plans and standards for the long-distance transport of carbon dioxide. Specific aims to be achieved by 2020 included the establishment of projects with annual capacities of one million tonnes for capture, two million tonnes for utilization (specifically, enhanced oil recovery) and one million tonnes for storage. By 2030, supply chains for these technologies were to be fully developed and commercialized, each being allocated specific cost targets.12

MOST followed up in 2013 with a more detailed CCUS plan for the period to 2015. In the same year, the National Development and Reform Commission issued a document promoting CCUS pilot and demonstration projects that included the need to support research, develop economic incentives, establish standards and build human capacity. Two years later the Ministry for Environmental Protection issued draft guidelines for assessing the environmental risk related to CCUS.13

The level of direct support for CCUS rose significantly during the 13th Five-Year Plan period (2016–2020). The technology was mentioned in several national and subnational plans relating to energy, technology and climate change mitigation. An explicit aim was to invest RMB 37.5 billion in CCUS in order to reduce emissions by 390 million tonnes per year.14

Recent policy documents from the Chinese government mention CCUS, calling for research and development as well as demonstration projects in the years ahead.

However CCUS has the potential to grow significantly in China, with major climate benefits.

In addition, CCUS technology could become a significant export market for China. CCUS facilities may be needed in many countries as an important tool for meeting net zero pledges.

The extent to which CCUS contributes to meeting China’s carbon neutrality goals will depend on a number of factors, including the cost of CCUS, progress in other decarbonization technologies and public acceptance. 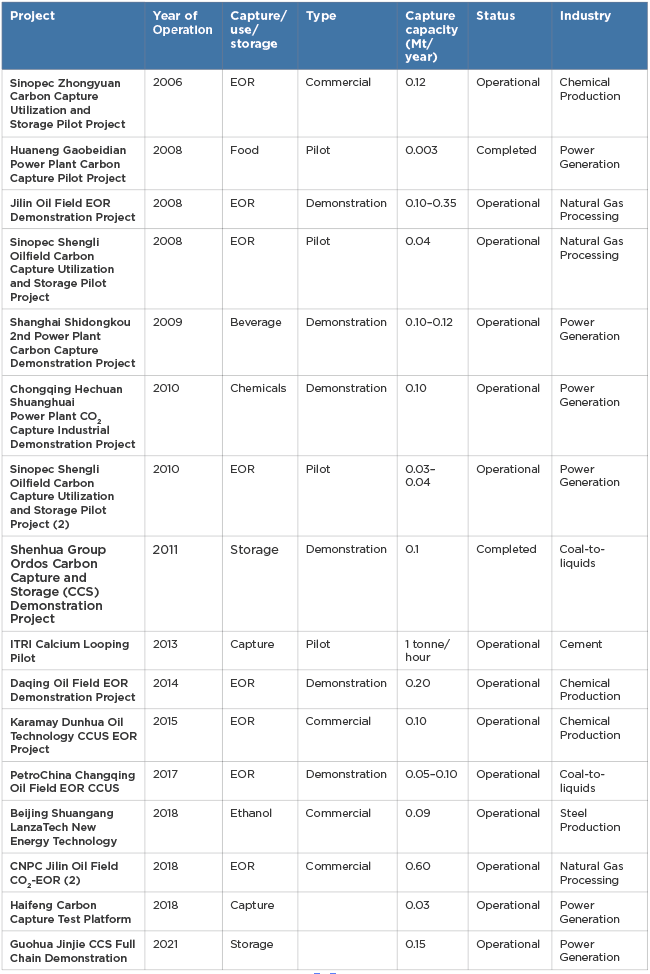 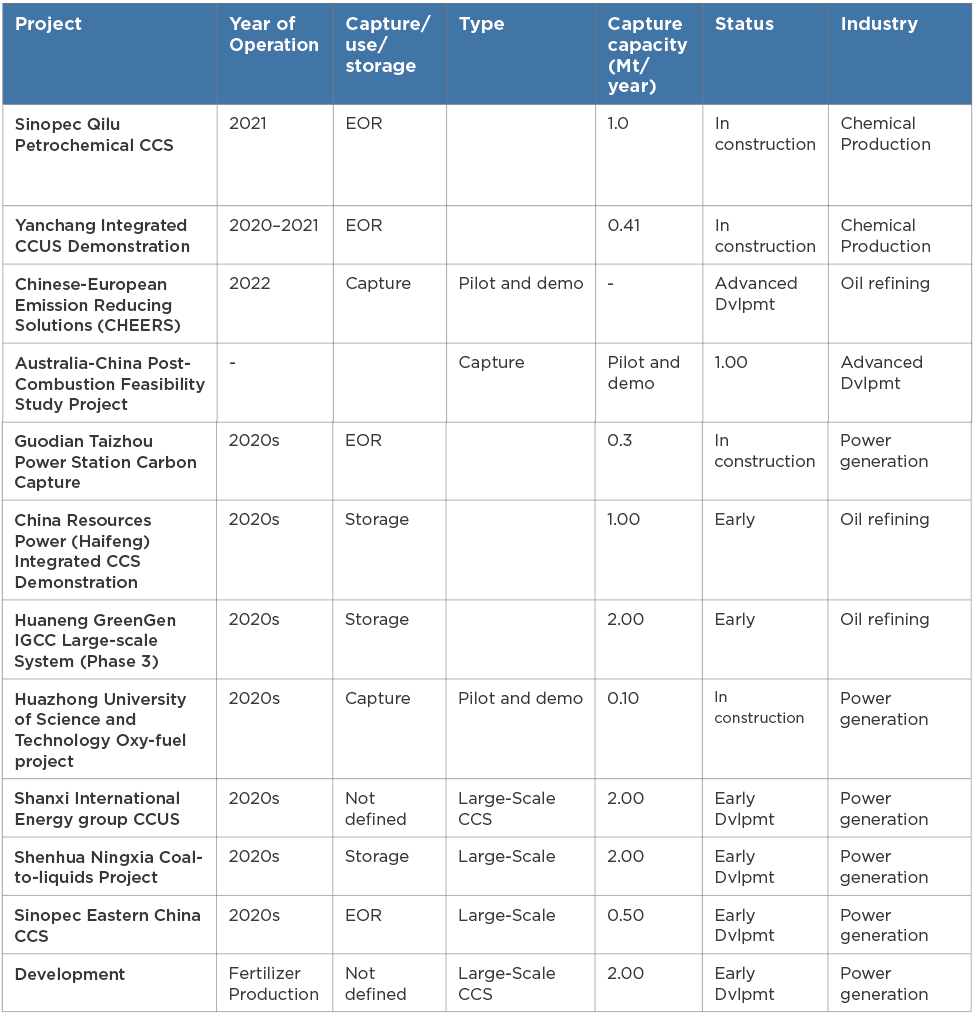