Almost a quarter of China’s land mass is covered by forests, according to official statistics. The Chinese government has ambitious forest conservation programs and highlights growth in forest stock volume as a prominent climate change goal.1

Most new forest growth in China is in monoculture plantations. The impact of China’s timber and food imports on tropical forests abroad may substantially or completely offset the climate change benefits of China’s domestic forestry programs.2

Forests cover large parts of southern China, from Fujian Province in the east to Sichuan and Yunnan Provinces in the west. Forests also cover much of China’s far northeast. There are fewer forests in the densely populated region between Shanghai and Beijing and almost none in the far western provinces of Xinjiang and Tibet.

Roughly 23% of China’s territory is covered with forests, according to the Chinese government and United Nations Food and Agriculture Organization (FAO).3

China’s forest cover has expanded in recent decades, according to Chinese government sources. 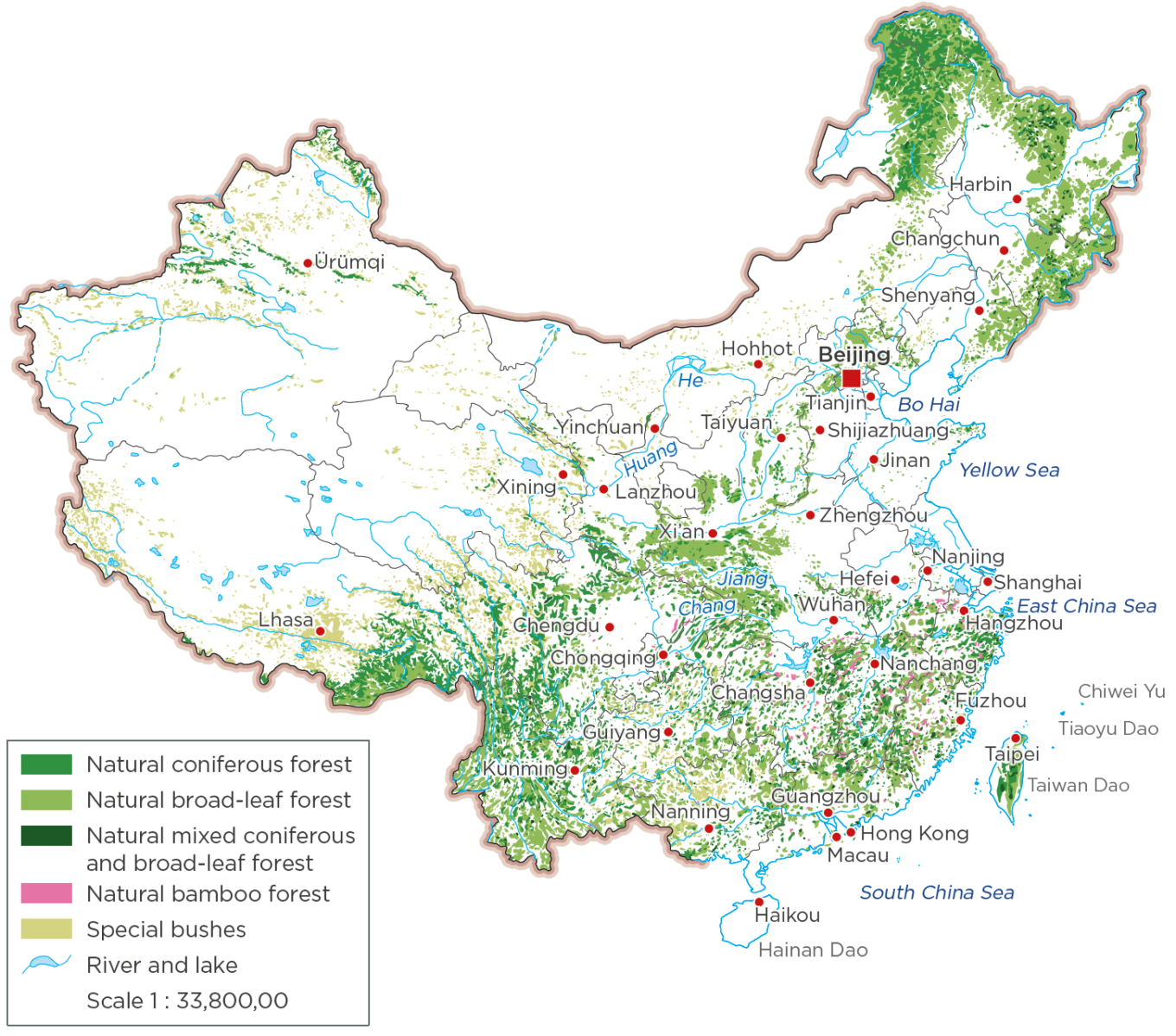 Several academic studies provide similar estimates for the years prior to 2010.

However, at least one source finds that tree cover has declined in China in the past several decades. Global Forest Watch, an online platform that provides forest data, reports that:

The different estimates may in part be due to different definitions. A 2017 study found that:

Data quality may also be a problem. Some studies have found systemic over-reporting of tree cover in China, in part because tree cover goals are included in the performance criteria for many local and provincial officials.12

The 14th Five-Year Plan sets goals for the protection and restoration of important ecological zones. Six of these goals relate to forestry.16 (See table below.) 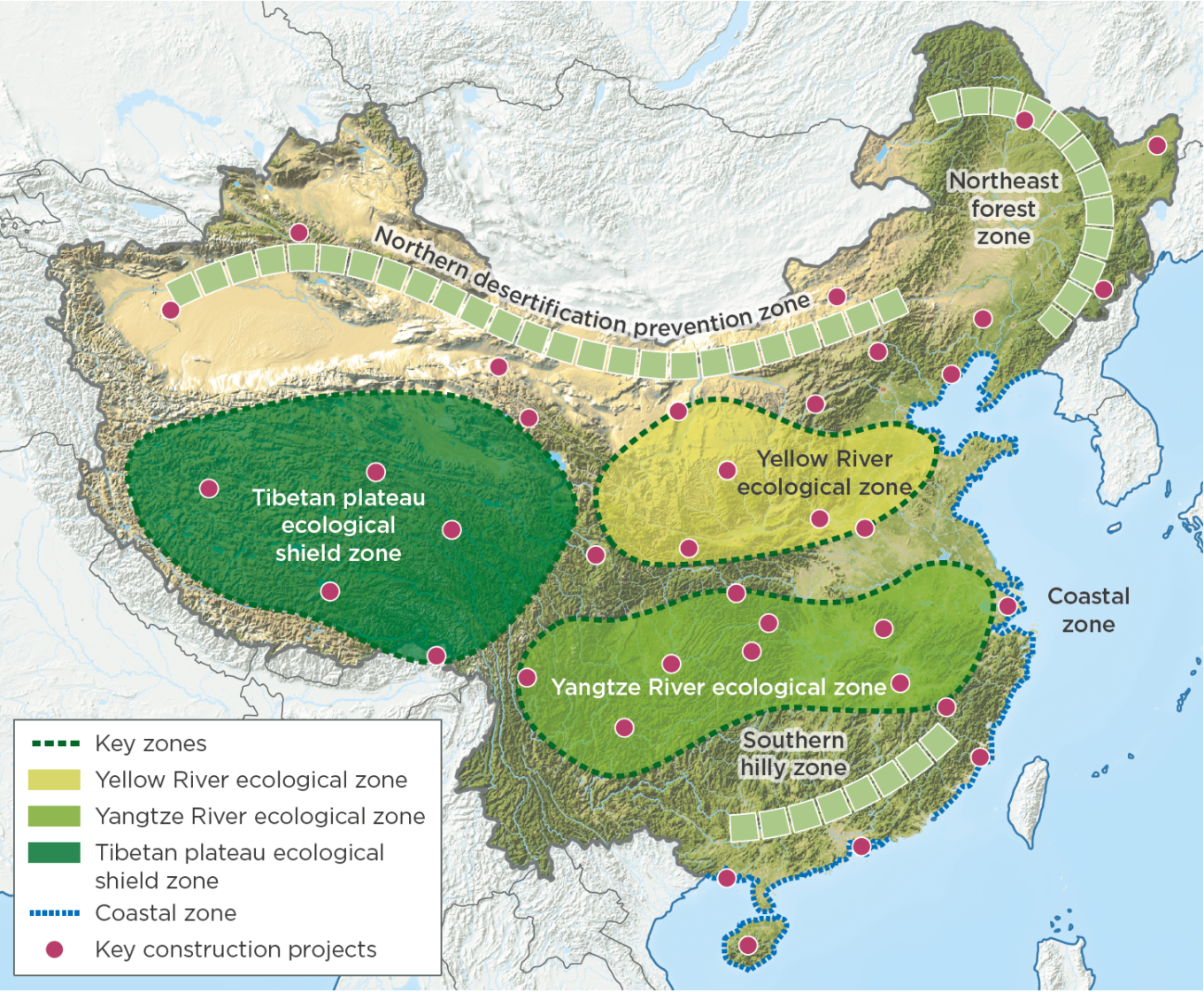 The Chinese government has extensive domestic forest conservation programs. The largest, known as the Natural Forest Conservation Program, includes large-scale tree-planting, an expansion of forest reserves and a ban on logging in primary forests. From 1998 to 2018, the central government spent more than RMB 475 billion (roughly $72 billion) on the program.19

Historically, the goal of China’s forest conservation programs included preventing floods and fighting desertification. The Three-North Shelterbelt Program, launched in the late 1970s, is a multidecade program to plant a 4,500-kilometer wall of trees through the Gobi Desert to reduce sandstorms. The National Forest Conservation Program was launched in the wake of the catastrophic Yangtze River floods of 1998. In recent years, the goals of China’s forest conservation programs have expanded to include fighting local air pollution and climate change as well.20

In December 2019, the National People’s Congress revised China’s Forest Law for the first time in 10 years. The amendments banned buying, transporting or processing illegal timber and require processing companies to establish a data record of raw materials and products. Environmental advocates praised the amendments, while saying the impacts would depend on how actively the new provisions are enforced. The amendments also strictly control the logging of natural forests and limit annual harvest volumes.21

The National Forestry and Grassland Administration (NFGA) within the Ministry of Natural Resources has principal responsibility for forest management in China. The NFGA was established in 2018 as part of government-wide institutional reforms, assuming the functions and responsibilities of the former State Forestry Administration at that time.27

Several provinces, including Sichuan, Guangdong and Guizhou, have launched pilot carbon sink trading for poverty alleviation programs. Under these programs, poor households can receive compensation for planting and cultivating trees in part for the carbon storage value.28

The Chinese government has provided official estimates of the carbon sequestered in land use change and forestry activities combined.

China is the world’s largest timber importer. In 2019, 56% of logs and sawn wood bought in China were imported.36

In addition, some Belt and Road Initiative projects are through forested areas, which has led to deforestation.39

From a global perspective, these trends may substantially or completely offset the climate change benefits of China’s domestic forest conservation policies. China’s impacts on tropical forests around the world are especially important with respect to climate change. Tropical deforestation can lead to significant warming, due to both the release of carbon dioxide from vegetation and biophysical effects such as changing the albedo of the Earth’s surface.40

In September 2020, the China Council for International Cooperation on Environment and Development (CCICED), “a high-level international advisory body with the approval of the Government of China,”41 released a report finding that:

“The Chinese government could strengthen measures to reduce the import of soft commodities that are illegally harvested or produced in their country of origin. This could build upon a provision regarding the legality of timber in the latest revision of the Forest Law.”42

In 2021, the Chinese government signaled attention to deforestation abroad in several international fora.