China is the world’s largest producer and consumer of hydrogen. Most of this hydrogen is used as a chemical feedstock. Almost all hydrogen in China today is made from coal or natural gas, releasing carbon dioxide (CO2) to the atmosphere in the process.1

Hydrogen is the most abundant element in the universe. However, with rare exceptions, hydrogen occurs in nature only when bound with other elements into molecules such as CH4 (methane) or H20 (water). The process of separating hydrogen from those molecules can result in substantial CO2 emissions (such as when hydrogen is stripped from coal or natural gas). The process of separating hydrogen can also result in almost no CO2 emissions (such as when hydrogen is released from water using electricity made with renewable or nuclear power).3

Hydrogen is not a heat-trapping gas. As a result, hydrogen can play an important role in helping fight climate change. 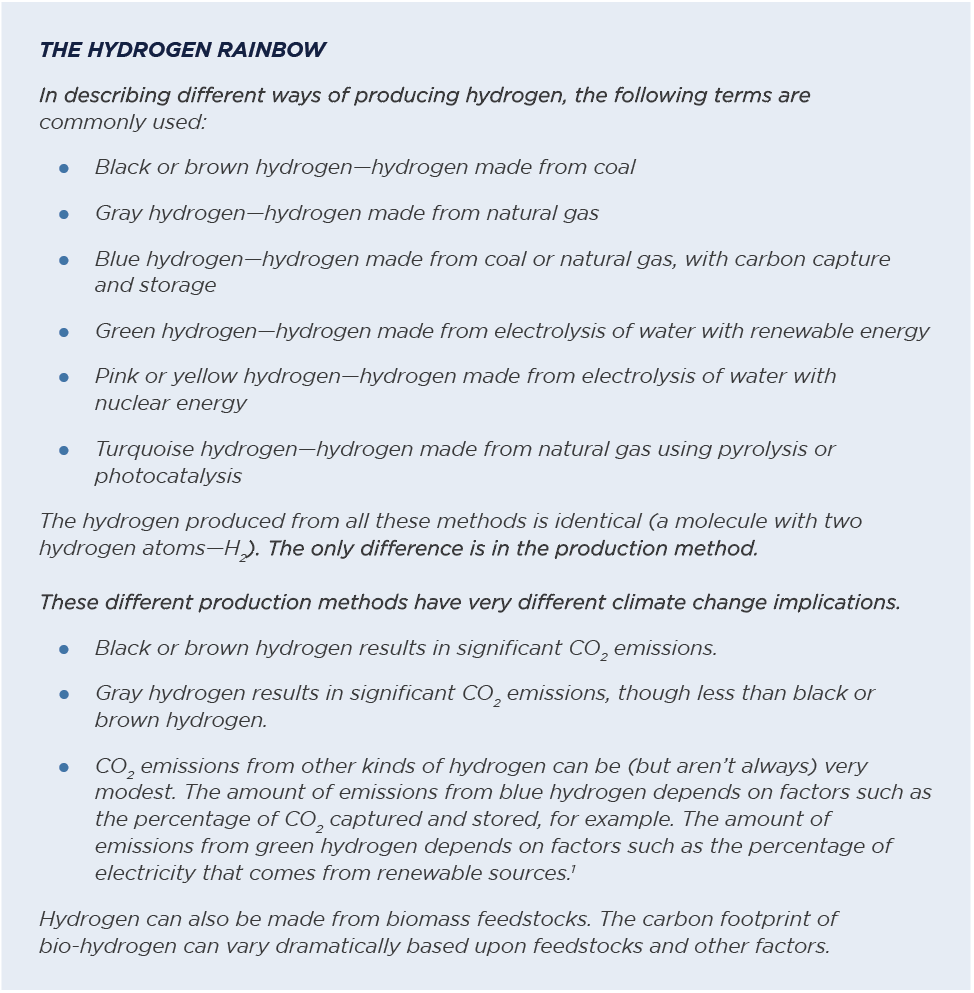 China is the world’s largest producer of hydrogen, with an annual output estimated at 33 million tonnes (Mt).8 Black or brown hydrogen (from coal gasification) predominates, unlike in most other countries where gray hydrogen (from steam reformation of methane) is most common. Roughly 60% of China’s hydrogen comes from coal and 25% comes from methane. Most of the remaining hydrogen is a byproduct of petrochemical industry processes. A very small percentage of China’s hydrogen comes from electrolysis.9

According to the IEA, the use of hydrogen-based fuels could avoid cumulative emissions of close to 16 Gt CO2 in China by 2060, with the biggest reductions coming from industry, followed by shipping, aviation and road transport.12 However for hydrogen to help mitigate climate change and contribute to decarbonization, it must be produced with low-carbon processes and leaks must be controlled.

In 2015, the Chinese government published the Made in China 2025 initiative—a ten-year plan to upgrade China’s manufacturing industry—citing hydrogen as a key technology to develop in the energy vehicle market.14 The following year, the first Hydrogen Fuel Cell Vehicle (FCV) Technology Roadmap was released aiming for mass application of hydrogen in the transport sector by 2030.15

The Hydrogen FCV Roadmap included interim targets to have 5,000 FCVs in demonstration, alongside 100 hydrogen refueling stations by 2020, focusing on industrial clusters and demonstration-application areas in the Beijing–Tianjin–Hebei area, as well as the country’s manufacturing and export powerhouses in the Yangtze River Delta, Pearl River Delta, Shandong Peninsula and the central region.16 At the end of 2021, 10,700 FCVs (mostly buses and trucks) were deployed in China, with 194 hydrogen fueling stations in operation.17

The National Alliance of Hydrogen and Fuel Cells (or China Hydrogen Alliance) was launched in 2018. In an April 2021 report, the Alliance predicted that hydrogen production from renewable energy in China would reach 100 Mt by 2060, with total hydrogen use reaching 130 Mt and accounting for 20% of China’s final energy consumption. According to the Alliance, around 60% of hydrogen demand will come from industry, with most of the rest coming from transport.21

The transport sector has remained a focal point for government hydrogen policy. In 2020, China’s Ministry of Finance (MOF), Ministry of Industry and Information Technology (MIIT), Ministry of Science and Technology (MOST), and National Development and Reform Commission (NDRC) jointly released A Notice on Optimizing Fiscal Subsidies for Promoting New Energy Vehicles22 as part of the government’s annual review of subsidy policies. In the Notice, “new energy vehicles” refer to battery electric vehicles, plug-in hybrid vehicles and fuel cell vehicles (FCVs). The 2020 Notice set out measures to replace vehicle purchase subsidies with a four-year pilot program in which cities were selected to carry out research, development and demonstrations of FCVs. The scheme rewards clusters of cities based on a series of parameters, including the deployment of more than 1000 FCVs that meet certain technical standards, achieving a delivered hydrogen price at a maximum of RMB 35.00/kg ($ 5.00/kg) and providing at least 15 operational HRSs.

In 2020, the four ministries further issued A Notice on Launching Demonstration Applications of Fuel Cell Vehicles23 offering additional details on the four-year subsidy program for FCVs which aims to support the entire value chain from vehicle production and infrastructure development. Cities can apply to be included in the pilot program with funding attributed according to a point system.24 Following the Notice, several provincial governments issued their own subsidy programs,25 in addition to central government support.

In March 2022, NDRC published its Medium- and Long-Term Plan for the Development of the Hydrogen Energy Industry (2021–2035)28—the first official document to lay out a long-term vision for China’s hydrogen economy. The Plan consolidates hydrogen policy initiatives into a single document and reiterates some goals set out in previous plans, including the deployment of 50,000 fuel cell vehicles by 2025.29

NDRC’s Hydrogen Plan emphasizes that provinces should choose their hydrogen production routes according to local conditions (including resource endowments and industrial structure), giving them considerable leeway in hydrogen production. This could promote innovation, as the provinces experiment with different approaches for scaling up hydrogen infrastructure. It could also lead to overcapacity, as provinces build production capacity independently.

NDRC’s Hydrogen Plan calls for establishing hydrogen markets close to current production sites, including where hydrogen is recovered as an industrial byproduct from alkaline production, propane dehydrogenation (PDH) plants and renewable electrolysis power-to-gas. The Plan also calls on the industry to pilot more advanced technologies including seawater electrolysis, nuclear hydrogen production and others. The Plan reiterates the importance of hydrogen fuels for transport in the near term but emphasizes that, going forward, hydrogen application needs to be developed in energy storage, power generation, industry and other sectors.

NDRC’s Hydrogen Plan also calls for production of 100,000–200,000 tonnes of green hydrogen per year by 2025 (roughly 0.3% to 0.6% of current hydrogen production). According to NDRC, this will lead to CO2 emissions reductions of 1–2 Mt per year by 2025. These targets are widely seen as easily achievable. By 2035, Beijing is aiming for a complete and diversified ecosystem of green hydrogen applications, covering transportation, energy storage and industry.

The Plan is informed by a number of earlier policy documents:

All these documents include discussions of hydrogen, highlighting the growing importance of hydrogen both as an industry and a low-carbon solution for China’s decarbonization plans, they offer few concrete targets and details.

The relationship between the Chinese government’s hydrogen policies and its climate goals is unclear. Today, almost all hydrogen in China is made from fossil fuels, releasing heat-trapping gases into the atmosphere in the process. The expansion of this industry as called for in central government planning documents could significantly increase emissions. The planning documents also call for increased production of low-carbon hydrogen, but in small amounts. If demand for hydrogen grows faster than the supply of low-carbon hydrogen, that would increase CO2 emissions, making it more difficult to achieve China’s carbon peaking and carbon neutrality goals.