Top-level decision-making on Chinese climate policy is coordinated by the National Leading Group for Climate Change, Energy Conservation and Emissions Reduction. Prior to the 20th Party Congress in October 2022, Premier Li Keqiang served as chair and Vice-Premier Han Zheng and State Councilor Wang Yi served as deputies. Thirty ministers, directors and other top officials are members. 1 Among the main tasks of the National Leading Group are to:

In addition, a Special Leading Group on Carbon Peaking and Carbon Neutrality coordinates activities related to the 2030 carbon peaking and 2060 carbon neutrality goals. In June 2021, Chinese media reported on a meeting of the Special Leading Group chaired by Vice-Premier Han Zheng and attended by roughly 60 officials from different ministries and committees. The role of the Group is to coordinate efforts to peak carbon dioxide emissions and achieve carbon neutrality. 3

China’s Ministry of Ecology and Environment (MEE) has principal responsibility for climate change policy within the Chinese government. According to MEE’s website, MEE’s mandates include:

“Take the leading role in work related to climate change. Initiate the formulation of key strategies as well as plans and policies tackling climate change and greenhouse gas emissions; Along with other governmental departments, participate in international negotiations on climate change; Carry out China’s role in the United Nations Framework Convention on Climate Change.” 4

MEE received these responsibilities as part of a government reorganization in March 2018. Before that, the National Development and Reform Commission (NDRC) had taken the lead on climate change within the Chinese government for many years.5

NDRC has substantial continuing influence on climate change policy. That influence comes in part from NDRC’s broad authority over economic development, including over planning processes and project approvals. It comes in part from the National Energy Administration (NEA), which plays a central role in many Chinese energy policies and sits within NDRC. It comes from officials and supporting staff with climate change experience who remain at NDRC as well. 6

Other parts of the Chinese government that play important roles in policies related to climate change include the:

Many quasi-governmental institutions and universities provide research and analytic support that informs the development of Chinese climate change policy. They include the:

Chinese provinces play a key role in the implementation of climate policies. Under China’s “target responsibility system,” many of the central government’s key climate and energy targets are allocated to individual provinces, with provincial leaders responsible for fulfilling them. Each province has its own Leading Group on Climate Change, chaired by top provincial leaders. 10 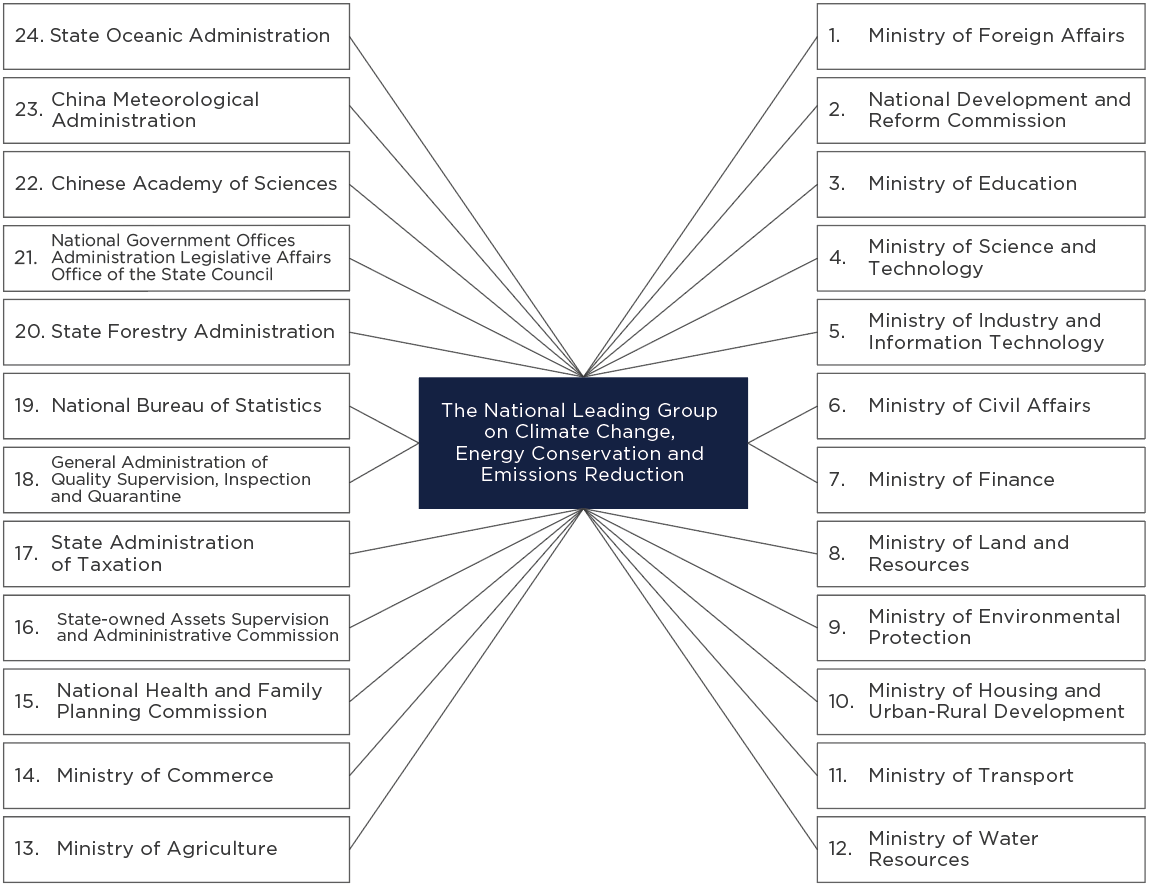