China leads the world in deployment of wind power, with more than one-third of global capacity. China has led the world in new wind power additions every year for the past decade. 34

China’s domestic firms dominate the Chinese wind turbine market. Vestas is the only international company in China’s top 10. Chinese companies are not major players in most wind power markets outside of China, in contrast to solar PV where China dominates the global supply chain. 38

China has significant wind power resources, especially in Inner Mongolia, Xinjiang and other northern and western provinces. (See map below.) 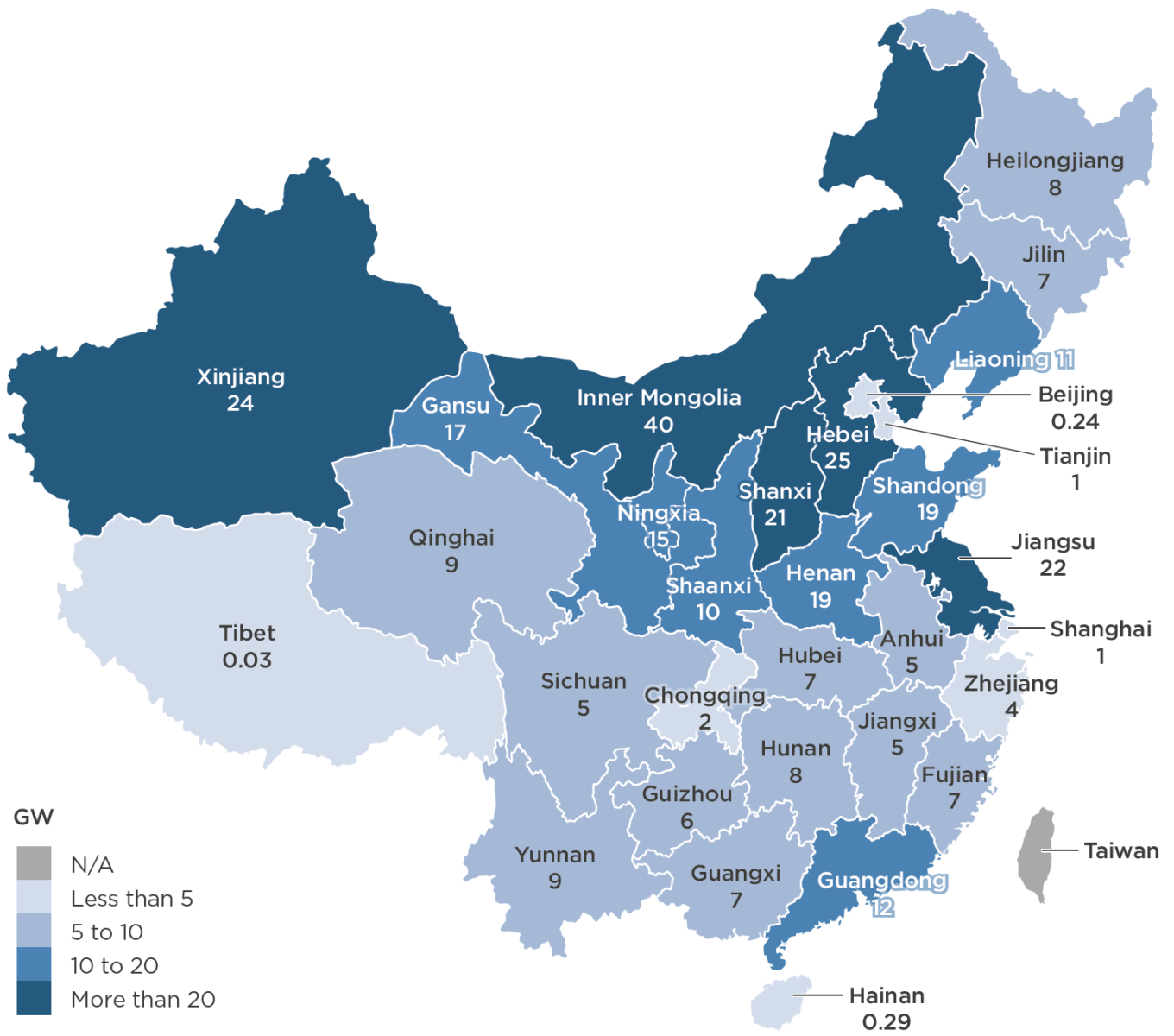 Initially, most wind power was located in China’s northern provinces, but in recent years new development has tended to shift towards the more populous eastern provinces.

Curtailment of electricity produced by wind posed a significant challenge in past years, but the situation has been largely resolved at a national level since reaching a peak curtailment rate of 17% in 2016. In 2020, China’s wind power curtailment rate was roughly 3.5% nationally, with rates of 10% in Xinjiang, 7% in Tibet, 6.4% in Gansu and 5.5% in Hunan. 40

A National Energy Administration draft notice on clean energy industry development issued in 2021 set a goal for solar and wind to provide 16.5% of China’s total electricity generation in 2025. 42

China’s feed-in tariff for wind power dates to 2009. Rates vary by region and are declining slowly. In early 2019, the Chinese government announced major changes to the feed-in tariff policies for wind and held auctions for wind projects to sign long-term contracts at below local coal tariffs. 43 Feed-in tariff subsidies remain for offshore wind power, which can help explain the strong growth experienced in this field since 2020.

Under the feed-in tariff regime, starting in 2016 the central government intervened to slow the provincial construction of wind or solar to prevent curtailment, issuing regular investment monitoring reports. In March 2019, the National Energy Administration’s investment monitor halted wind power projects in Xinjiang and Gansu (including those that had already been approved) and banned approvals of new wind power projects in Inner Mongolia and parts of Shanxi, Shaanxi and Hebei. 44 In 2020, the NEA halted new wind projects in Tibet, Tianjin, Hebei, Sichuan, Yunnan, part of Shaanxi, part of Gansu, Qinghai, Ningxia and Xinjiang. 45 With curtailment largely at low levels and feed-in tariff subsidies phased out, these interventions may be dropped.