China’s abundant coal resources can be used to produce oil, natural gas and many chemicals, reducing China’s dependence on imports of these products. However coal conversion processes typically have high financial and environmental costs. Emissions of carbon dioxide (CO2) and local air pollutants from such processes can be especially significant.

Policy support for coal-based oil, natural gas and chemicals in China has varied over the years. As energy security concerns have become an especially prominent priority for Chinese leaders in the past several years, attention to coal-based products in Chinese policy documents has grown. Several 14th Five-Year Plan documents call for technological innovation with respect to these products and planning of coal-to-oil and coal-to-gas strategic bases.1

Industrial processes for coal conversion date back to at least the early 20th century. However such processes are expensive and rarely commercially viable except in times of high oil or natural gas prices.

Coal conversion also consumes large quantities of water. This is a particular challenge in China, where some of the most abundant coal resources are in the arid and semi-arid northern regions. Water recycling is an option, but the treatment of wastewater from these plants remains a technical challenge.3

The coal chemical industry in China uses coal both as a feedstock and as an energy source.

China’s use of coal liquefaction technology dates back to the 1930s. It grew after World War Two due to the country’s shortage of oil reserves, however the discovery of the Daqing oil field in 1959 brought a temporary end to the priority assigned to this technology. The oil crises of the 1970s triggered a renewed interest not just in the established, indirect liquefaction process (Fischer-Tropsch) but also in developing direct liquefaction technologies.4 Momentum increased after China became a net oil importer in 1993. By 2006, the government was envisaging annual production of liquid fuels from coal of 30 million tonnes.5

China’s capacity to liquefy coal expanded rapidly in the early 2000s as coal-rich areas of the country took advantage of rising oil prices and favorable government policies.6 The industry’s products were used for transport and petrochemicals.7 However, the Chinese government started to restrict such coal-to-oil projects due to their environmental impacts and, by 2008, only Shenhua’s liquefaction plants were allowed to proceed.8

A new Shenhua coal-to-oil plant came onstream in 2016 at a cost of about RMB 55 billion and with an annual capacity of four million tonnes of oil products.9 The output of oil products from this and other newer plants in China reached about five million tonnes in 201910—less than 1% of China’s annual oil consumption.

The liquefaction process to produce transport fuels is only commercially viable when oil prices are high. The process also has a high energy cost.11

The need to reduce urban air pollution has spurred the production of synthetic natural gas from coal. China’s first two synthetic natural gas (SNG) plants started commercial production in December 2013, in Xinjiang and Inner Mongolia. Environmental concerns led to a temporary suspension of project approvals in 2015. The following year saw three new projects approved, in Xinjiang, Inner Mongolia and Shaanxi. The government had originally set annual production targets for SNG of 15–18 bcm by 2015 and 32 bcm by 2017 and hoped for 55 bcm by 2020.12 In 2021, SNG accounted for about 6 billion cubic meters or 3% of domestic gas production.13

SNG could reduce the level of air pollution in the urban areas of northern China such as the Beijing–Tianjin–Hebei region, especially if allocated to the residential sector rather than to industry and power generation.14 However, SNG appears to be less efficient in the use of coal than advanced coal-fired plants.15 It yields a lower energy return on investment than imported gas16 and bears significant commercial risk.17

China’s demand for petrochemical products is likely to continue rising for the foreseeable future, even as demand for oil in the transport sector steadies due to electrification. As a result, the focus of investment in liquefaction has switched from coal-to-oil to coal-to-chemicals. There was a surge in the number of planned projects in 2017, including 15 coal-to-ethanol plants.18 The production of petrochemicals involves the gasification of coal to produce methanol which can then be converted to olefins such as ethylene and propylene. These in turn form the basis for making plastics and many other materials used in daily life. Another product is ethylene glycol which can be used as an intermediate to manufacture polyester for clothes and other fabrics.19

By 2018, coal was the source material for 16% of China’s petrochemicals, up from 3% in 2010. Although coal-to-olefins is the most profitable of the various coal conversion processes, its commercial viability still depends heavily on the prevailing price of oil. Meanwhile, the commercial viability of coal-to-gas and coal-to-ethylene glycol has been questionable, as evidenced by the slow growth of coal-to-gas capacity and low utilization rate of coal-to-ethylene glycol plants. As a result, the industry has been supported by billions of RMB per year through direct and indirect subsidies.20

Coal conversation grew in China in the early 2000s. Starting in 2008, the central government began issuing a number of policies to manage the coal conversion industry more tightly. These included:21

These documents sought to balance the desire to promote the modern coal chemical industry with the need to protect the environment and manage water resources.

In 2015, the NEA issued an Action Plan for Clean and Efficient Use of Coal (2015–2020).22 This spelled out in some detail the need for the “moderate” development of the coal chemical industry, including coal gasification, along with strong directives on protecting the environment and managing water resources effectively. In the same year, the Ministry of Environmental Protection issued its Environmental Entry Conditions for Modern Coal Conversion Construction Projects (Trial).23 This emphasized the need for all projects to maximize energy efficiency, minimize pollution and water use, ensure that discharged water meets national standards and manage solid waste effectively.

The 13th Five-Year Plan for Energy Development (2016–2020) identified the need to develop large-scale plants for coal-to-oil and coal-to gas and bring the national annual capacity to 13 million tonnes and 17 billion cubic meters respectively by 2020. It also mentioned coal-to-chemicals, the construction of pipelines to transport coal-based natural gas and further development of technology for indirect liquefaction.24 The 13th Five-Year Plan for Natural Gas Development reiterated the need to produce more coal-based natural gas, though it omitted the 17 billion cubic meter target.25 These plans were supported with substantial subsidies.26

Taken together, these documents signal renewed interest from Chinese policymakers in coal-based oil, natural gas and chemicals. The development of these industries would make it more difficult to achieve the Chinese government’s 2030 carbon peaking and 2060 carbon neutrality goals. 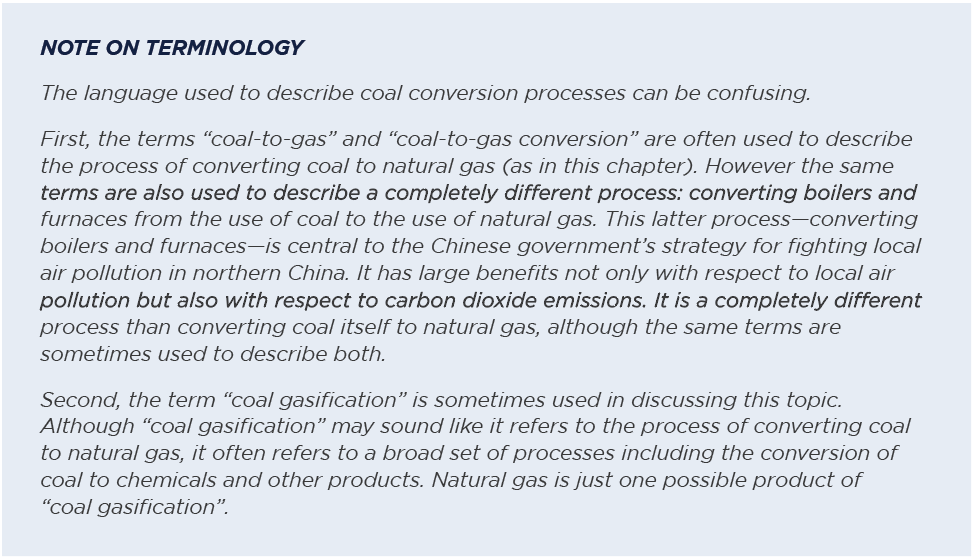